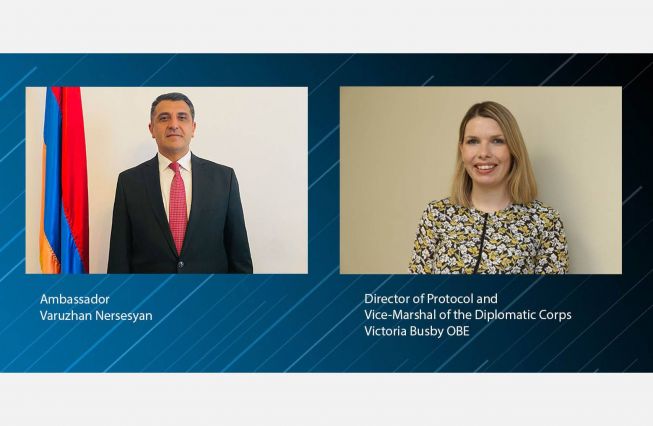 
On 3 September, Varuzhan Nersesyan, the newly appointed Ambassador of the Republic of Armenia to the United Kingdom, presented the copies of his credentials to Victoria Busby OBE, Director of Protocol and Vice-Marshal of the Diplomatic Corps at the Foreign, Commonwealth & Development Office.

Congratulating Varuzhan Nersesyan on the start of his diplomatic mission in the UK, Victoria Busby wished success to the Ambassador expressing confidence that his activities will give a new impetus and content to the bilateral relations.

The Ambassador expressed his gratitude for the warm reception and good wishes and highlighted that he will strive to do his utmost to bring the Armenia-UK political dialogue to a new level, as well as to expand bilateral cooperation in economic, cultural, tourism, and a number of other areas.

During the meeting, among other issues, the Climate Change Summit (COP26) that is to be held in Glasgow in November this year was touched upon, in the context of which Ambassador Nersesyan highlighted Armenia's readiness to make a constructive contribution to this crucial event devoted to a global issue.
share:
MFA RA
official website
Dual citizenship
Electronic visa
Visa applications